This is going to one of many post dated blog entries generally about film photography. One of the delights and difficulties about shooting film is the time between taking the image to actually viewing the image. This can be a benefit and also a negative.

It was never going to be brilliant but the purpose of these first shots was to test my ability to load and unload the dark slides, meter correctly and use the camera correctly.  There is a lot to go wrong in large format film photography.

This evening in the late afternoon spring sunshine, the old wooden chair we had made many years ago was looking particularly photogenic. 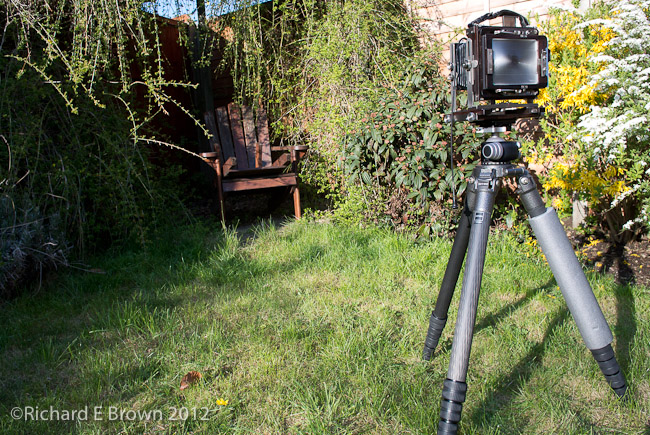 I have looked at this chair nearly every day for over ten years but today I had the perfect excuse to photograph it, my finished large format Ebony 4 x 5 inch Large Format Camera.

Last year I had managed to pick up a mint Large Format Nikkor 150mm f/5.6 standard lens, and since then I have been added accessaries such as dark slides, a lupe and a dark cloth.  The Camera a Ebony 45s, came on the 3rd April, a mint condition secondhand model from Robert White.  The reason I have not used it for the last two days was because I had no way to attach it to the tripod.  Another order to Robert White and an Arca plate for the camera was quickly dispatched to me.

I was torn between black and white, and colour but in the end, the warmth of the late evening sunlight decided; it would be colour.

So with fresh inspiration flowing through my veins I checked out what film I currently had loaded; as I was wanting to capture a ‘real’ image and only film would do, it was also the perfect excuse to try out the Ebony for Real.

Luckily I had a few sheets of 5 x 4 Fuji Provia RDP100 already loaded, as I had gone out that morning to test the camera out but had not used it (don’t ask: but it involved a trip to a Windmill and a heavy tripod left in the garage at home, thus no film used). 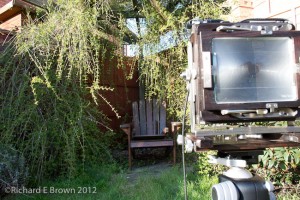 I whipped out the Ebony 5 x 4 and mounted it on my largest heaviest tripod, a Gitzo Series 5. For some reason I had committed a cardinal sin, in that I had not put away the large format camera without first centring all the movements, unfortunately I did not notice while setting up.

With the camera mounted firmly on the tripod, I chose my large format Nikkor 150mm f/5.6; a nice standard lens on 5 x 4 inch format. I opened up the lens aperture to its widest setting, and set the shutter open to enable me to focus.

Focusing a large format camera is a very different experience to that of a modern SLR. The lens has an aperture setting but also has a shutter built into it. The Camera is just a light tight box. The lens clips onto the front of the camera, and to focus you need to lock the shutter open to allow the light through to shine on the glass panel focusing screen attached to the back of the camera. The front of the camera holding the lens and the back of the camera holding the glass focusing screen are linked by a soft leather bellows. To actually focus you move the lens on the front and the back glass screen forwards and backwards until the image projected onto the back glass screen is in focus. 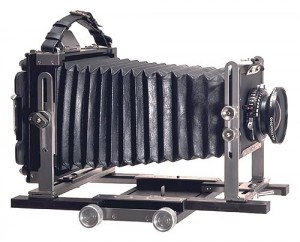 The large format camera like my medium format camera lacks a built in meter, so out came the handheld meter. Metering the scene I selected a 1/2 second exposure at f/34. The Nikkor lens allows apertures to be set in 1/3 stops, which is useful, as the copal shutter in the lens only works in whole stops.

So here it is my first photograph taken with my new Ebony, i’ll admit it it will not win any awards as the contrast was too high for the film, but one that I am pleased with.

Not a brilliant shot, but it did what was necessary, it tested everything out and it all worked.  More importantly my metering was right, always a worry for film cameras with no meters built in.

I’ll be going out again later in the month shooting some more large format film.  These shots like the one above will not be artistic master pieces, in fact I expect them to be quite poor, but it will enable me to master my technique, then I can move on to more creative shots.