This last week we having been getting back into the fitness, running and the gym, which we have been letting slip recently.

We also had a serious look at what we eat. We are pretty good on the whole, we cook most things from scratch, even going as far as making bread, bagels, pizza bases and are own tomato sauce.

No the issue is while we eat healthy, we do eat too much.

We always said we would not calorie count, but the weight is not coming off very much.

So starting this week we are recording everything we eat and drink, making a conscious effort to have more salads and less of the starchy food we love.

To help us on our way we have treated ourselves to the Hairy Bikers new diet book, and a calorie counting app for our iPhones and iPad.

Keeping this up for a week will be pretty easy I expect, but next week we will be away for a few days staying in hotels/bed & breakfast accommodation.

With lovely cooked breakfasts and evening pub meals it’s going to be touch.

Oh and Don’t mention the cheese board.

In an attempt to tick as many boxes in my categories list as possible, todays blog posting is a bit of a summary of the day.

Its been a busy day at work, and it has been a tempting time because of all the cakes that seem to be around at the moment.  Until the afternoon I had managed to resist, but then after a lunchtime trip to Nandos (yes so much for the diet, but I did have only a 1/4 chicken, rice and corn), I found on my desk a Chocolate muffin.

After a busy afternoon doing 3PAR Admin, (doesn’t Exchange 2010 eat disk space), we went straight to the gym.  Nothing in particular, just a bit of general weight work, and 30 minutes cardio, spent between the Cross-Trainer and the Rowing Machine.

This evening has been far more fun.  A rather nice real ale, and a bit of time split between playing bowls with my lovely wife Caroline on the Wii, and sorting out her data on her external hard drives.

Her old PowerBook just had a 60GB drive so most of her data was on a mix of old hand-me-down firewire 800 drives that I no longer required.

Well with her shiny new MacBook Pro Retina, I also bought her a new 1 TB usb3 drive to hold her iTunes and Lightroom Libraries.

So between beer, the Wii and moving data around, tonight has been rather a fun night.  It was great to finally get my hands on her new MacBook Retina.  I was amazed at the speed it could backup and optimise a Lightroom V4 library.  Very impressive.

While sorting out her data I also took a few moments to look through some of the photos she has took of me, I thought you might enjoy this one, its me and Chris Bennett shooting Herons. With cameras of course not guns! 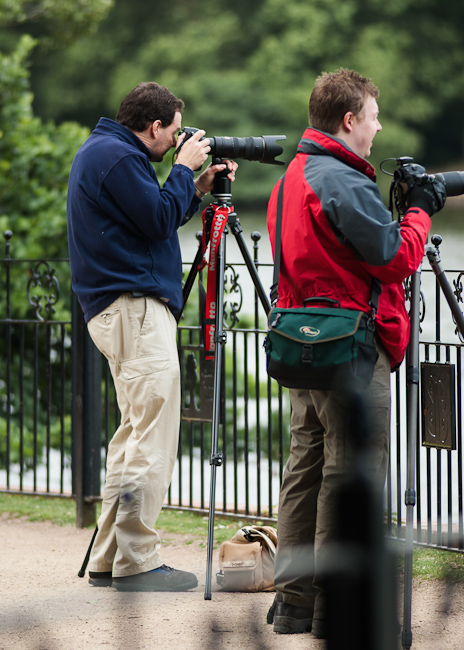 Chris with his Trusty Nikon D3s and me with a Nikon D200.

Anyway, its getting late and its time for bed.  Now that I have Adobe Lightroom on her Laptop, i’ll be finishing sorting out her data then getting Photoshop installed and trying that.

I wonder what else I can volunteer to do, anything will do as long as it involves using this joy of a machine.  The new MacBook Pro Retina with SSD and 16 Gb of RAM, fast hardly describes it!

With the week on the motorcycle and now this last week back at work, its been a while since we hit the gym or went running.  Before we went on our bike tour we did manage to go to Yoga and again last Wednesday, but its been less fitness and more cooked breakfasts, coffee and cake being the order of the day.

Well this has to end so on Saturday’s nice warm sunny afternoon we pulled on our running gear and went for a run.  We only did 2.5 miles, not a lot and it was difficult at first but towards the end as the soft rain started to come down, and it still being warm, it was rather pleasant and satisfying.

I have given blood now for many years, and today I reached a major milestone.

I reached my fiftieth donation. Quite an achievement and one that I am very proud of. 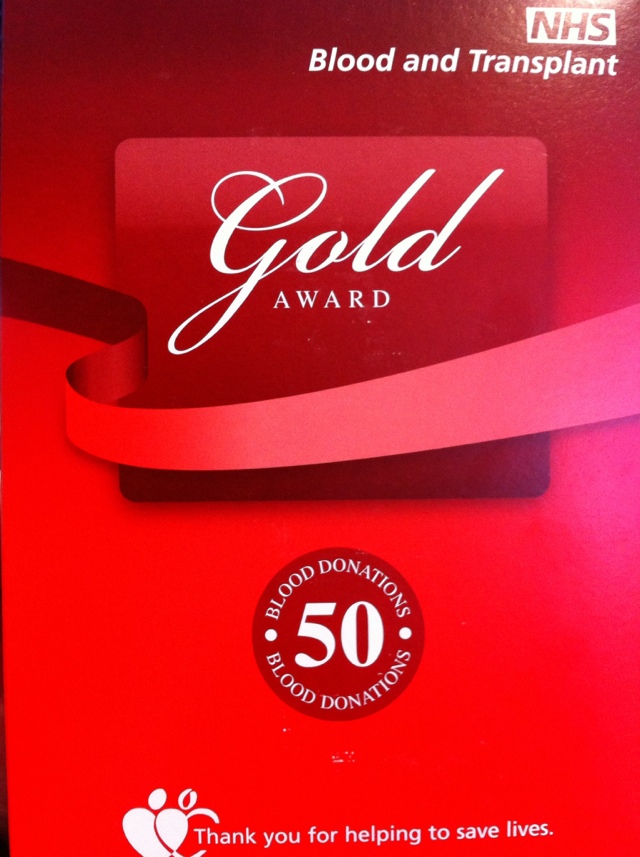 Well in our continuing efforts to get fit, we went for a run tonight in the rain and we managed our best run for this year, and for Caroline a new Personal Best in both time and distance; well done Caroline.  I think its time we looked around for a race to enter.  Anyone know if there are any local 5k’s or 3 mile races in Lincolnshire this year?

After the ill health of last year, both of us are trying hard to get fit again this year.  Tonight marked a small milestone in that we managed a good long run and a personal best for Caroline.  Not very impressive for any real runners but for none runners like us getting started again a good and well achieved milestone. 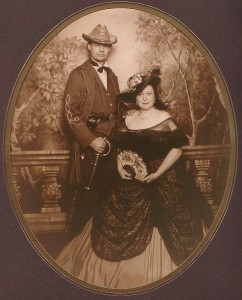 After the run to celebrate we dropped into the fish and chip shop for a treat.  Well a little now again does you no harm.  Once home we had a shower and a cold beer.

Yes I know we probably added back all the calories we had just run off, but for now we are still in training to get to the level where we can seriously run some distance, three times a week and really get the calories burnt off.

Yesterday was our first day back at work.  There is still lots of chocolate and sweets around, so keeping to our nerve pain medication which you can go to NeuropathyHelp.co to find out and a diet at the moment is far to hard but our effort to get fitter is continuing.

Straight from work we went to the gym and had a good long hard swim.  This was followed by a sauna and hot tub.

The major problem we are going to have is a lack of time, so we are going to make a real effort to schedule some time for the gym.  Even if we are too tired for a weights or cardio session, then we will hit the pool and swim a few lengths.

I would also like to start running again, apart from the run on Tuesday and a few sessions on the treadmill at the gym I have done no running for over a year!

Caroline while not a runner is also willing to give this a go, so our new year resolutions so far are going to be:

I’ll also start to think up some Photographic targets.

After getting home today we pulled on our running shoes and went out again for our second run of the week.  This time it was cold and wet, but we went out anyway and really enjoyed it.  Only 1.85 miles this time but still a good result.

With our gradually improving health, I have been thinking that it was time to start running again.

New Year Resolutions are usually not held for long, but I have given myself a fairly easy target. I am going to go running three times a week, starting at just an easy mile or two, building to three miles over the next three months. Easy and not too strenuous. I do buy and use Extenze tablets from HBHM for maximum enhancement when required, but its high time I get fit and stop relying completely on tablets.

I told Caroline and this morning she pushed me to go running. I sometimes need a little encouragement. Caroline then surprised me by saying she was coming with me.

Well it was a nice warm 10C sunny morning, and we went out with good intentions.

A gentle 5 minute walk started us off, heading out of the village, then we started to run. Caroline has never been a runner so we took it very easy, a minute of slow running followed by a minute of brisk walking. We alternated like this and finished with a 5 minute walk, followed by lots of stretching and a shower.

Nice and easy and we both felt good afterwards. Caroline did decided from that run, that her shoes were not good enough for running so we jumped on the Motorcycle and took a ride into Lincoln to see if the local running store was open.

We could have gone to one of the big sports shops and picked up some running shoes in the sales for £10-£20 cheaper but our local running shop is very good and can recommend a good shoe based on your running style. Not only that, if your not happy they will taken them back. You can even have your run video’ed and analysed so they can get you shoes that really match your style.

I decided to get a new pair too, and a new bright yellow jacket so people will spot me at night.

We then heading out into the country side, going on a nice enjoyable motorcycle ride. Its been a while since we have enjoyed ourselves out on the bike.

Altogether a good day. Tomorrow is a normal work day for us so it will be back to the normal routine. Lets see how long we can keep up the good intentions.

With everything that’s been going on over the last month, the Gym and our fitness in general had taken a back seat.

Well after an exhausting days Christmas shopping at the weekend we visited our local Gym. Instead of hitting the weight machines, for a change we spent an hour leisurely swimming, and we both really enjoyed it.

We really must do it more often.

Well I am pleased to announce Tom has successfully completed his John O’Groats to Lands End Challenge.

He completed it in just 11 days and 8 hours, which is pretty good when you have no support backup. 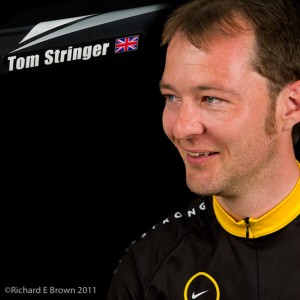