Today was a gentle start. First we packed the car, not forgetting the camera gear and the 12″ Apple Powerbook, then set off to pick mum Brown up. Mum safely in the back with her bags in the boot it was off to pick up Caroline’s dad. Once all loaded up we set off. First a gentle cross country drive to the lovely town of Buxton in Derbyshire. Here we stopped for a bite to eat in a local cafe.

We swopped drivers and set off again. Again we took the scenic route and soon found ourselves in the Snowdonia National Park, we took the back route, one I know well, having ridden it many times on both the Honda and the BMW Motorbikes. Soon we were in Canaervon and settling into our hotel.

A large cooked breakfast was had then it was off to Holyhead on the Isle of Anglesey. Half an hour later we were there waiting for the ferry. 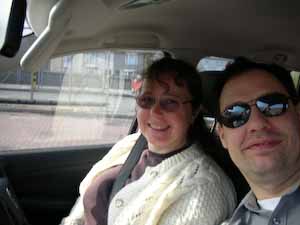 A two hour wait and we were on our way again. Two hours and ten minutes later and we were pulling into Dublin Harbour. It was not long before we were driving off the ferry and looking for the M1 signs to Belfast. The tunnel was closed and in the confusion we took a wrong turn. Time for TomTom. I grabbed my PDA and fired up TomTom, switching on the external GPS receiver I soon had directions to take us safely through Dublin and onto the Motorway. It was near Drogheda when we came to a toll booth. Û1.70 euros later and we were back on our way. Soon we were in Northern Ireland and as we had passed the mountains of Morne the country became gently rolling hills and very green. Lots of horses in the fields as well as black and white lambs and a few cows.

As we came into Ballnahinch we spotted the turn and soon we were at our holiday home for the week, The Sycamores. We were welcomed warmly and shown around. A very nice four bedroom two story house, on its own in the country side. We unpacked and then went shopping.

After tea we set off in the car again and went to see Aunty Becky. We all had a cup of tea there and left mum Brown there to spend a few days.

Our first full day in Ireland, well Northern Ireland to be precise. Alan suggested a trip to New Grange. The weather was reasonable if a little overcast so we though we would give it a go.

New Grange is a 5000 year old burial site and a World Heritage site, and well worth a visit.

New Grange is very impressive, the white quartz wall was rebuilt via an experimental archeologist it give you an idea of what it looked like 5000 years ago.

To get inside you have to use the steps to get over the stone blocking the doorway. It is quite intricately craved as you can see.

Inside the main chamber the layout is very similar to Maes Howe which we visited on the Orkney Isles. Both worth reading about and visiting if you get the change.

Day four was a bit of rest and a gentle drive round the local loche. Stopping to see the sites. A ruined Monastery, a National Trust Village and a castle. 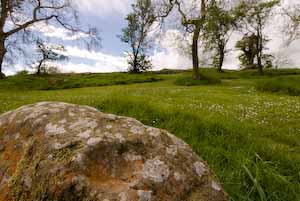 First we had to pick up mum Brown, then a drive through Belfast, past Stormont and onto the coast road for a scenic drive to the top of the county. 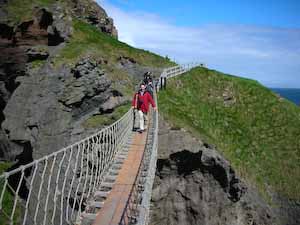 After a nice lunch we got to the top of Ireland and visited the famous Carrick-a-Rede Rope Bridge. We had first seen this on Billy Connellys DVD, his tour of Britain and Ireland. 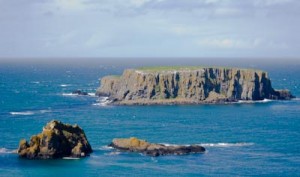 Once across the bridge the views, as you can see were amazing! Some people having got to the other side have had to be air lifted by helicopter back. It can be scary.

Next we headed west a few miles and came to the world famous Giants Causeway.

Its a steep climb down from the cliff at the top but we cheated and took the bus down. Once down you can see the blocks, even the most exposed blocks still look like they have been chiseled to make such straight lines. Its not something you see in nature very often. 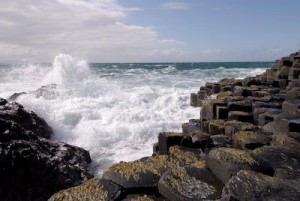 We continued along the coast as far as we could seeing the sites. Eventually we could go no further. It was the start of the North West 200, the famous Northern Ireland road race. It was practice day and the roads were being closed at 17:00. We headed back taking a slow inland route round one of the big loches.

Yesterday we had joined the National Trust, so today we checked the guide book and looked for a local site to visit. We decided to look round the Gardens of Rowallane. 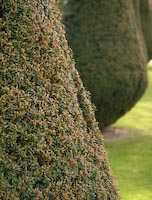 We had a good look round and Richard took lots of photographs of the gardens and flowers.

After our lazy day yesterday, today was going to be very long day. We decided to drive over to the west coast and have a look at the Atlantic Ocean Coast of Ireland.

Our destination was Moyteoge Head on Achill Island one of the more westerly parts of Ireland and a place to visit by keen surfers.

The weather went downhill once we arrived but once Richard had packed away the camera gear the sun came out and we got a glimpse of the sun. Quickly grabbing the camera Richard took a few shots.

Its a very beautiful area and also quite popular as a destination for bikers. We spotted a couple of riders from Germany in the car park as we headed back.

Day Eight: Friday – Rest Day, off for a walk.

Yes as the title says, a rest day. We popped into town had a look round, had a coffee and teacake in the local cafe then back to the cottage.

In the afternoon, Alan and Christine stay and rested while Richard and Caroline went to the coast and had a long walk in the rain. Yes we are strange.

A sad day. First we had to say goodbye to the cottage and pay for the oil and electricity. Then it off to jump on the main toll road to Dublin.

Once in Dublin we took the tunnel direct to the port. If you know where your going do not take the tunnel it costs way too much!

We arrived at the ferry terminal we hours to spare.

Once the ferry we settled down for the two hour trip across the Irish Sea. At about two hours later, just off the coast of Wales we stopped. The Captain explained we had taken something into the engine intakes, so we would be going backwards for a while until they cleared. Ten minutes later we were back on our way and soon in port.

Thirty minutes after we had docked we were back at the hotel and went out for a meal. The food was good, in fact judged against what you normally get when eating out, excellent but compared to what we had at the restaurant in Ballnahinch it was disappointing. Still it was good and so was the beer. 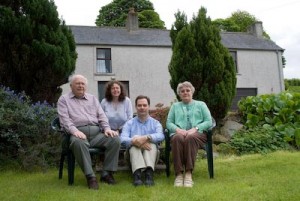 What can we say. It was a great holiday, the cottage was lovely, the people friendly and the food fantastic. Lots of places we would love to go back to.