This is going to one of many post dated blog entries generally about film photography. One of the delights and difficulties about shooting film is the time between taking the image to actually viewing the image. This can be a benefit and also a negative.

Today I set out to visit Hartsholme Park in Lincoln. It is a location I visit often in the spring, as it is a great location to get some really good bird shots. 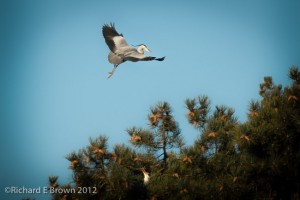 Today though, it was not wildlife I was after but two landscape shots.

When I arrived the sky was a little too blue and lacking in some cloud but I had hopes that at least one of my two ideas would work.

I parked up and as I walked over to the lake I was surprised to lots of old Austin 7 cars arriving. I would definitely have to check them out later but for now I needed to get setup to make the most of the low sun.

Today I was shooting film on large format and small format, with digital being handled by my trusty Nikon V1.

I arrived by the lake and started to search out the position I had spotted on a previous visit. I soon found the spot I wanted but was disappointed to find that there was someone in the water marking out a model motorboat course. With the foreground I wanted those nice bright yellow markers floating in the lake would be right in the middle of my picture. Time for a re-think. A slight move to the right would mean I would lose the foreground I wanted but would give a clear view of the main focal point.

Well it would still be a nice shot so I decided to go for it. I setup the tripod and got out my meter and started to measure the scene.

The shadow on the far bank looked to be about the darkest part of the scene so I took a spot meter reading. It measured at 9.6EV which I loaded into the meters memory, I then measured the highlight on the water which was 13.8EV, and the sky was 15.6, that was a six stop range, bit much for film, but I thought I could afford to let the shadows block up a little so I would risk a shot using the Large Format Ebony 5×4.

Setting up I shifted the camera back to move the focal point lower in the frame, as there was no foreground interest in this new position. I some close trees framing the shot on the bank but being so close there were out of focus. Time for the scheimpflug effect. The great thing about large format is the camera movements, its like having photoshop built into your camera.

Not thinking I used some front tilt to drop the lens board forward to allow me to shift the focal plane and give me more depth of field. I rechecked the focus and something was not quite right. I used a little more front tilt and checked again. Things seemed worse, thats weird I thought. I stopped and thought for a moment, what was going on. Then it hit me. Dropping the front with front tilt is used to bring the foreground into focus, but this shot was unusual, my foreground was the tree cover; I was tilting the wrong way!

I soon reset and started again, tilting the ‘wrong’ way this time to bring the overhead branches into more focus, time to grab the film.

I took a dark slide loaded with Fuji Provia 100 and put it in the back of the camera. Time to re-meter.

That gave me an average 13.2EV, a bit more manageable. I closed the lens and set a aperture of f/36 (thats f32 and a third) and a shutter speed of 1/8 second and took a shot.

Time to pack up and move to the next location. This was a scenic view of the lake, I walked over but the light was not right and there was no cloud interest, it would have been a pretty shot but nothing spectacular.

Time for a walk. 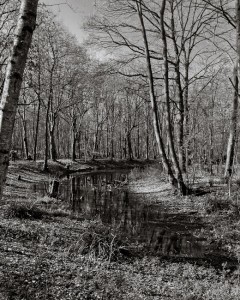 I had a bit of an explore and found a number of areas that could produce promising pictures. The shot above was a quick snapshot with the Nikon V1, certainly an area that needs more investigation.

I then headed back to the cars, and took a quick snapshot of the cars.

A good days photography, I did not get the shots I wanted but I certainly got some new ideas for more shots in the future.

I also tried a snap shot of the cars using the Ebony, a shot bound to end if failure you would think, well I like it even with the blur of the people.