RAW verses JPeg.  Which to use.

Its an old Argument on the forums but JPeg seems to becoming more popular again, but why?  Well in Camera processing is a lot better then it used to be, and the connivence and ease that it gives certainly speeds up the workflow.

Once the photographs are imported into my DAM Package (Digital Asset Management) they then have meta data and keywords added to them.  Even with import scripts and presets it is still quite a bit of work.  Its worth it though as anyone who has been approached by a buyer who wants to purchase the high quality original to the small jpeg you have placed on Flicker or your Blog will testify.  Being able to quickly and easily find your work, a week, a month or even five years later can mean money in the bank, and not being able to find it a lost sale.  Keywording and adding Meta Data to your photographs is essential to any semi or full time professional photographer.

But back to the original question; what about editing and post production?

The above two pictures show a edited RAW file followed by the out of camera jpeg.

Some of the in camera jpegs do look a lot better then the raw files imported into your favourite raw processor.  It is a complaint that a number of photographers make.  The image they see on the back of their camera is nothing like the RAW image they see after importing into Adobe Camera RAW/Lightroom.  What a lot of people don’t realise is that modern RAW software is designed to give a basic flat image.  It is then up to the Photographer to take that image in the direction they wish to go.

My out of camera jpeg is certainly not as good as it could be, there are lots of in-camera settings to improve things, but what people don’t realise is that the histogram is based on the in-camera JPeg.  So if you tweak the JPeg you are altering the display of the histogram.  Currently only the Leica Monochrom can display a real histogram based on the RAW file.  White Balance also has a major impact on the histogram.  I try to have my JPeg settings configured to give me an accurate as possible histogram.  In the above shot my White Balance is out due to the complex mixed light source, if I had got this right in camera then the JPeg would have been better.

So the top image has had a lot of tweaks and adjustments made, while the second image is just an out of camera JPeg.  Is the added work necessary and worthwhile?

Well this example may be a little extreme, the lighting was mixed light sources, the contrast high and the exposure difficult.  I got the shot wrong in camera but as I shot RAW and JPeg, I had the RAW to fall back on.  RAW files can be edited far more then a small 8 bit JPeg.

For an outdoor street scene the in-camera jpeg and processed RAW would likely look the same, in fact the JPeg would highly likely be better.  In that situation one would likely say that the extra work involved in shooting RAW is not worth it, and I would likely agree.

But what about in this example.  The out of camera jpeg is reasonable, but by editing the RAW file, applying a simple preset and then a minor adjustment with a bit of additional burning and dodging, the image pops that little bit more.  But is the extra work worth it?  I suppose it depends on the image and the end result.

So what do I do?  Well I tend to shoot RAW and JPeg, but I have the JPeg set to Black & White.  That way in Lightroom I see images side by side, one colour (the RAW file) and one Black & White (the JPeg), I can then see at a glance which I prefer, colour or Black & White. 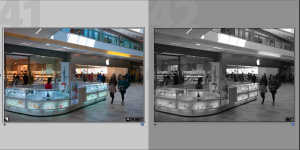 For personal work JPeg is a good option but while many currently professionals are saying that they use Compact Mirror-less Systems and shoot in JPeg it should be remembered that for their commercial work they are often shooting RAW on Medium Format, then at the end of session are shooting some personal stuff on mirror-less in JPeg and posting straight to their blog.  One is given the impression that Pro’s are now all shooting that way.