Well last week I did say I was going to photograph the Daffodils. Well the blooms were not yet open but this weekend they were so, with the trusty Nikon D200, 100mm f/2.8 macro lens and the macro flash gear I spent some time trying to get some good shots. 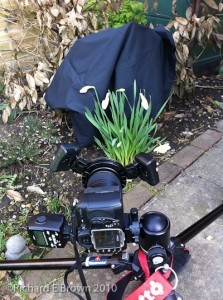 Near the back door next to our poor dead bay leaf trees that have been killed by the hard winter were a likely bunch of Daffodils.

Setting up the tripod, nearly as low as it would go, I composed on the open flower.  I wanted a black background so I laid a black cloth behind.

With only one Daffodil in bloom, I then switched over to the bush that had lots of yellow flowers. 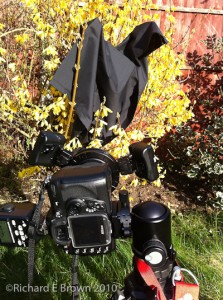 Once again I employed the black cloth and a high shutter speed to underexpose the background.

My attention was then next drawn to the bush next door which seemed to have an inordinate number of lady birds on it.

With so few flowers to chose from my last flower to photograph was the crocuses, a rather pretty purple.

A pleasant afternoon shooting.  Nothing to dramatic but good practice.

The lighting was nothing special just front lit via the macro flash.  Later in the month when we have more blooms to choose from I will definitely try something a little more challenging.

A few cut flowers, cut glass crystal vase and some studio lighting is in order