The BMF show had seemed so far away and we had done no planning at all, but suddenly it was Friday and the start of the BMF camping weekend. We had booked for the whole weekend and so the morning was spent having a final sort and check, getting all the camping gear together and strapping it all to the bikes. 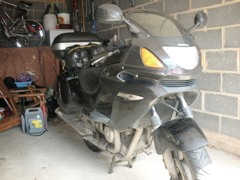 First off was the Deauville (Honda NT650V), top box and panniers for Caroline and the airbed, and the sleeping bags strapped to the pillion seat, not forgetting the camping stove and fuel also in the left hand pannier. 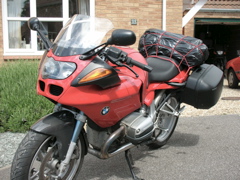 Then we loaded up the ‘S’ (BMW R1100S), panniers with Richard’s stuff and cooking pots, miscellaneous camping bits, and lastly the tent strapped to the pillion seat.

After a practice load, we then wrapped everything in carrier bags and bin liners and strapped it all down. All that was left was the tank bags which would hold waterproofs, spare gloves and of course the radios. We had bike to bike radios to help us out. Always nice to have a natter while you ride. 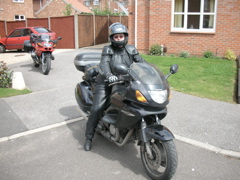 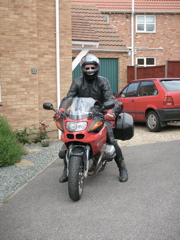 It was now time for the off, a gentle ride down the A15, stopping at a tea shop in Folkingham.

As we pulled into Folkingham it had just started to rain, so we were glad to stop for a very nice late lunch. While finishing our lunch the rain clouds blew away and we carried on to Peterborough in the dry, once there it was just a matter of following the signs to the BMF show. That at least was the theory, we missed the first turn but still managed to get there in the end. 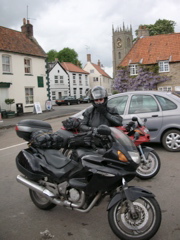 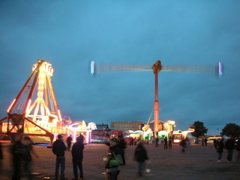 We soon found a good spot on the campsite, unloaded the bikes and setup the tent. We were then ready for the evenings entertainment.

As usual there was stalls for food, a large marque for the bands and a bar. The bar was a bit disappointing, only your common beer and lager – nothing interesting. There used to be a large bar with loads of different beers, this was something they should re-introduce. Also there was no bonfire this year. The fair proved popular despite the showers of rain. After Beer, Bands and Pasties it was time for bed. 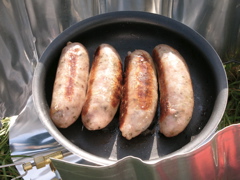 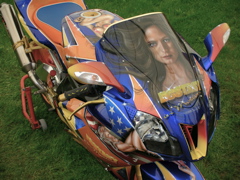 Come morning and a camp fire breakfast, its was time for the show proper. High on the list was the Honda, Moto-guzzi, and Triumph stands. The Pan European still did not fit Richard much better then the old one but the new Deauville was nice, but he feels that he has out grown it. Too much weight and not enough power.

Both of us have had soft spots for Moto-guzzi’s for many years and ever since Caroline saw the Moto-guzzi Breva 750 at the NEC show she has wanted one. Richard prefers the 1100cc Breva but both are good looking bikes.

The Triumph ST was also a good looking bike with the three under seat exhausts but the Rocket was simply stunning! They also had a Rocket trike!

The entertainment was great, but the highlights were the short track racing and the stunt team, see below! 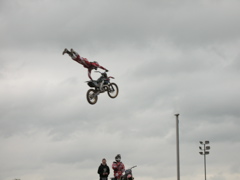