Another freezing cold day, we got up this morning only to find we had no water.  A quick check round found no damage (yet) so we suspected frozen pipes.  The main kitchen tap was also none functioning so it was most likely the main feed into the house.

We tried to turn off the stopcock only to find it frozen.  At this point we decided we better not go to work just yet, just in case we were looking at a flood should a frozen pipe burst, so we sent a quick email work to let them know.

The radiator in the kitchen had stopped working the previous day, and the kitchen had been very cold, that together with record low temperatures for the time of year, the most likely place for the frozen up pipe was where it comes into the house, in the cupboard next to the cold kitchen.

The kitchen radiator was an easy fix, take off the plastic valve cover and then a gentle tap with the hammer and we had heat again in the kitchen.

We then took turns gently heating the stopcock with a hair drier.  This did not produce any effect, so it was a trip outside to where the water meter was located.  Once again we directed a gentle heat onto the water meter using a hair driver.

After about 10 minutes we had running cold water again and we were able to turn off and back on the water stopcock.

With the central heating turned up, we kept an eye on the pipes for a further hour before finally grabbing a much needed shower, something to eat, and then we headed into work as the fog started to roll in. 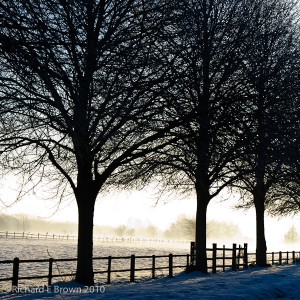 We then heard that Alan my father in law had the same problem. After work we headed up there and once again directed some gentle heat onto the water meter. Once again we soon had the water flowing.

Finally we got back home, only to find our neighbour waiting for us. She had no cold water either. We gave her some instructions and she said she would try them out in the morning, and if she had any problems she would let us know.