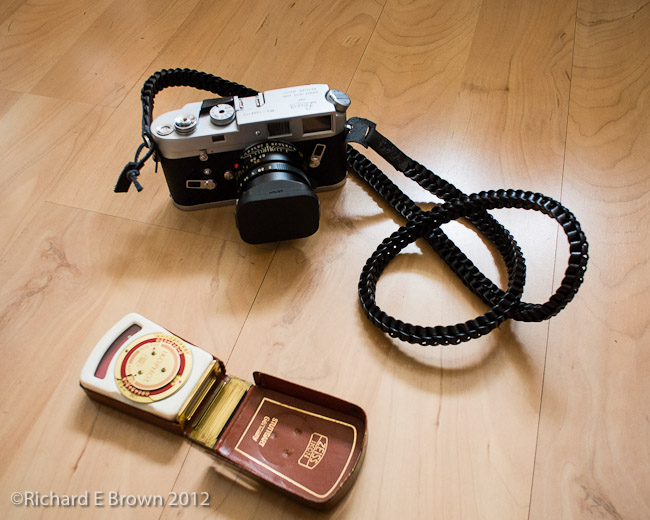 I have not been a Leica user for long. I wanted one for a long time but the cost put me off. Still over the last couple of years I have slowly been trying to buy some M Glass.

Finding bargains is hard but I have managed so far to get two great Leica Lens quite cheap, in fact if I wanted to sell them I would make a tidy profit.

Camera wise there was two Leica’s I wanted a film Leica M made the year I was born and a digital Leica M.

Last year I finally managed to achieve this and I am now the proud owner of a film Leica M4 and a Leica M8 which the previous owner had sent back to Leica to have the shutter upgrade to the better one thats in the M8.2 and M9.

The digital M cameras have not been without issues. The issues are now all fixed, but the M8 and M9 based cameras are a little slow in some areas like image review. The M8 also has the problem of enhanced infra-red sensitivity, this though does make it a great Black & White Camera, and should I ever get a M9 or the new M (Type 240) I would keep the M8 for its great Black & White.

In a few weeks/months there will a new kid on the block, the new M (Type 240). So far all of Leica’s digital M’s have used CCD sensors. At base ISO these produce fantastic images, and the great thing is how little post production the RAW files need. CMOS sensors tend to produce images that need a little more work bur CMOS sensors have a huge advantage over CCD and that is the lack of noise.

While I would happily use my M8 at ISO640 and a M9 at ISO1200, a modern DSLR with a CMOS sensor would produce great results at ISO1600 or more. They just produce less noise.

Now though Leica have produced there first CMOS based Leica M. Its worrying a lot of us, will it produce the kind of files we love from our M8/9’s or are we going to get images like a common SLR.

Leica are still finalising the firmware so the image quality is not yet at its peak. Also there is no DNG profile for it yet so RAW files processed do not look at there best. The few shots that have appeared so far have not looked good, but finally beta testers like Sean Reid (Paywall Site), Jonathan Slack and Mein Thein have started to post promising images. From what I have seen so far, at base ISO to about 640, there is not a lot in it, the M8/9 are really very very good but as ISO climb the new M starts to leave the others behind. If you really want to know more about this camera I can recommend subscribing to Sean Reid’s site if your into Leica and Mirror-less cameras.

The biggest change is in the feel of the camera with the improvements to the electronics. If you like to check the image on the back of the camera after each shot then the M8/9 will very quickly frustrate you with its slow speed to write the image and then review the image. From what I hear from reviewers the new M is a far different beast. With functions like video, live view, and an optional EVF, weather sealing, GPS add-on, ability to shoot with Leica R Glass including zooms its a totally different beast.

Its really going to be interesting how traditional Leica Photographers take to it. Still, if you still want an M9 its still available as the new M-E.