We were stopping at Hillcrest Bed & Breakfast, and over a breakfast of Whitby Smoked Kippers I checked the iPad to confirm the tide times and also using ‘The Photographer’s Ephemeris’, checked the sun position. Unfortunately it looked like unless i could be in two places at once I would have to give up on one of the shots. To get the Sun and tide in the right spot for one of the harbour shots I would not be able to get across the harbour and up to the Abbey to get another shot I wanted.

Still we would try and get at least a couple of shots.

As a bit of an experiment I had borrowed Caroline’s Crumpler Bag and packed the Ebony Camera, two lens and some dark slides. It’s a lot smaller bag then the ruck sack i usually keep it in. I also had the Nikon V1 with me.  While the kit all fitted in the bag, the weight could be telling.

First off we walked into town and across to the other side of the harbour using the swing bridge.  Once down onto the beach to the area where I thought the first shot was, I was unsupprised to see that the sun was unable at this time of year to rise to the point where it would illumiate the main focus of my photograph.  So it was 0/1 for the first attempts.

In fact it you could say it was 0 for 2 as there was another shot I wanted but it meant being on the other side of the harbour and it just would not have been possible to get across and capture both shots before the sun had moved.

Next I climbed onto the Harbour wall to shoot the stone seabed.  There are some interesting features visible at low tide that I wanted to capture. 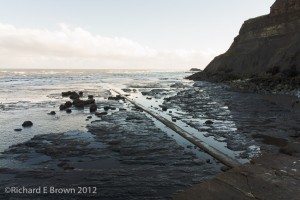 As you can see in the quick snap I took with the Nikon V1, the sun was not high enough to illuminate what I wanted to photograph.  I will just have to go back in the Spring.

It was now time to head up and take a shot of the harbour from part way up the cliff face. The ramp up was somewhat icy and it made the climb up a little tricky, but we managed.

I’ll blog about the next shot which I took with the Ebony 45S later once I have the film developed in Day 2 part B.

Finally it was time to shoot the Abbey.  There was two shots I had in mind, but it was unlikely I would get the first one as by the time we got up there the sun would have moved round too far, but we should get the second, which I did.  Again I’ll blog about that shot later. 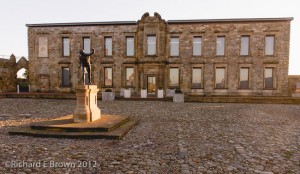 Once the Abbey shot was in the can, we headed back down for a Spicy Mocha Latte and a toasted chibatta.

Then a last walk round the shops and back to the Bed & Breakfast for a rest.  My back was by this time killing me.  The Crumpler bag while fine for a short while was not good for a full day of carrying the large format kit.  Still now I know.