A printer that can print 17 inches wide has been on my wants list for quite a while now.  Having the flexibilty to print up to 17 inches wide in a desktop printer is very useful.  Unfortunately while the Epson Stylus Pro 3800 series is the smallest foot print wide format printer its still not exactly small so its been on the waiting list until we bought the new house. 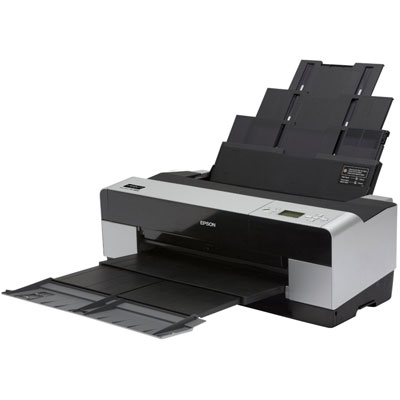 If you check on Epson’s UK website and also other online retailers the price differs by as much as £300.  At the Photography show last Monday I visited Epson’s stand and had  a look at the Pro 3880 and the smaller R3000.

The R3000 is A3 the Pro 3880 A2+ and there is not a big difference in the physical size.  Running costs is also a consideration as is build quality.  For a consumer printer the R3000 is one of Epson’s better high end printers.  The build quality is very good and as good as the professional services models.  The running costs are another thing; while the R3000 has fairly large economical cartridges for a consumer inkjet printer at 28ml, the Epson 3800 series has 80ml cartridges for not much more.

The show price was about as cheap as I had seen it on the internet, the difference being this was a well known supplier not an unknown company.

When you factor in the retail costs of the ink the printer only cost £370, but then who pays Epson retail costs for ink cartridges, I have seen them range from £30-£48 for the same Epson branded cartridge.

They did not have any of the printers at the show but were willing to sell me one at the very good show price and three days latter the postman delivered my shiny new Epson to me.

I have ordered a number of trial packs of paper from various companies including Epson and have selected a series of images that represent my style of work to test with.

I have also ordered a full set of new cartridges, with the first set needing about 20% of their capacity to prime the lines and print head and with the extensive testing I intend to do, I am not expecting the first set of ink to last long.