I have photographed Tintern Abbey on two previous occasions. The first was on a major motorcycle tour where we visited each of the major points of the Island that is Great Britain. The first time I took a few snaps on a dull day. The second time was bright midday sun. Neither was conductive to great photography but I managed some pleasing reference shots.

Today the goal was to try and a get a good shot with the large format Ebony. I thought the best option was from the English side of the river. Yesterday I had tried to find a spot with the car but that proved impossible. 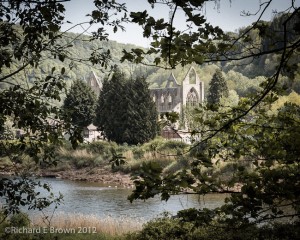 So today we had a long walk. We parked up at the Abbey and walked to the nearest bridge. On crossing I had hoped to be able to photograph the Abbey from the East bank but the bank was private property so the only option was to climb the tree lined valley side.

We kept on climbing but the trees kept obscuring the view back to the Abbey.

We knew from a previous visit and asking local people that some fine views could be had from a viewpoint called the Devils Pulpit but were unsure as to what it looked down on and exactly how far it was.

We kept on climbing and despite the difficult terrain and having to carry the large format camera equipment an a big heavy series five Gitzo tripod we eventual found ourselves at the viewpoint called the devils pulpit.

It did in deed have fine views of the river and of the Abbey so I set up to photograph it. It would have been better with a telephoto lens but the longest lens I current own for the Ebony is a standard 150mm. Still with the rocks that made up the Devils Pulpit I had a bit of foreground interest.

Once I get the film developed I’ll blog about this shoot some more but the climb was worth while.